Today Meg helped me spread fertilizer on the lawn and plant done new grad seed. I am slowly making progress on replacing weeds with grass. 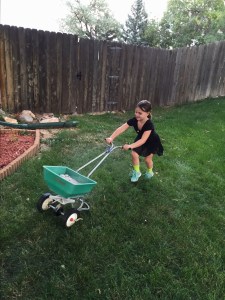 Last Saturday was Spencer’s first flag football game for the fall 2016 season. They got slaughtered, 0-28. Actually, after finally looking at the pictures today, it wasn’t quite that bad. They made a number of completions, and got close to a touchdown several times, but never quite made it. It was clear they really needed to work on blocking and pulling flags. By Thursday of this week, they looked much better, and they had an awesome victory today, 28-14. Spencer had 2 touchdowns, 1 touchdown pass, 1 interception, and pulled several flags. In particular, he is getting really good at evading rushers when he is quarterback, which we practiced at home this week, with Meg being the rusher. She is starting to enjoy football some too, though definitely not as much as Spencer.

Meg was a great cheerleader last week. After the game, she set up a lemonade stand by the field, which she had been wanting to do all summer, but we never got around to it. She made a $4 net profit in about 20 minutes. We did it again today, also making about a $5 net profit in a little less than an hour (unfortunately, I forgot to take pictures of the lemonade stand). Just as were leaving today, the ice cream truck came, and Meg used her hard-earned money to get some ice cream.

A couple days ago I was putting a new latch on one of our gates. As I was finishing up, I heard a buzzing, which seemed to be coming from the basement window well. I walked over to find a wasp (or maybe fly) caught in a spider web, buzzing as it unsuccessfully struggled to get free. A few seconds later, I saw the spider come out, and immediately recognized it as a black widow. It’s the first time I ever saw one in real life. I watched it for several minutes, coming out to spin up the bug, then go back into the corner. I went down to the basement to catch a glimpse from there, and saw two large egg sacs. I continued to watch the spider do its work for maybe 10 or 15 minutes, tried in vain to take a picture with my iPhone, and then grabbed the big camera. I caught a pretty good shot as the spider was carrying its prey back to the corner. As fascinating as all of this was, I bought some spray the next day and killed it. I just can’t take a chance on my family being bitten by a black widow.

Meg is ready for first day of kindergarten
Download

Meg in line for first day of kindergarten
Download 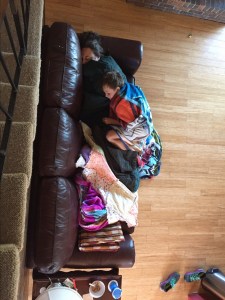 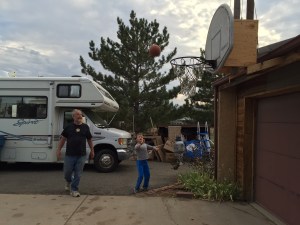